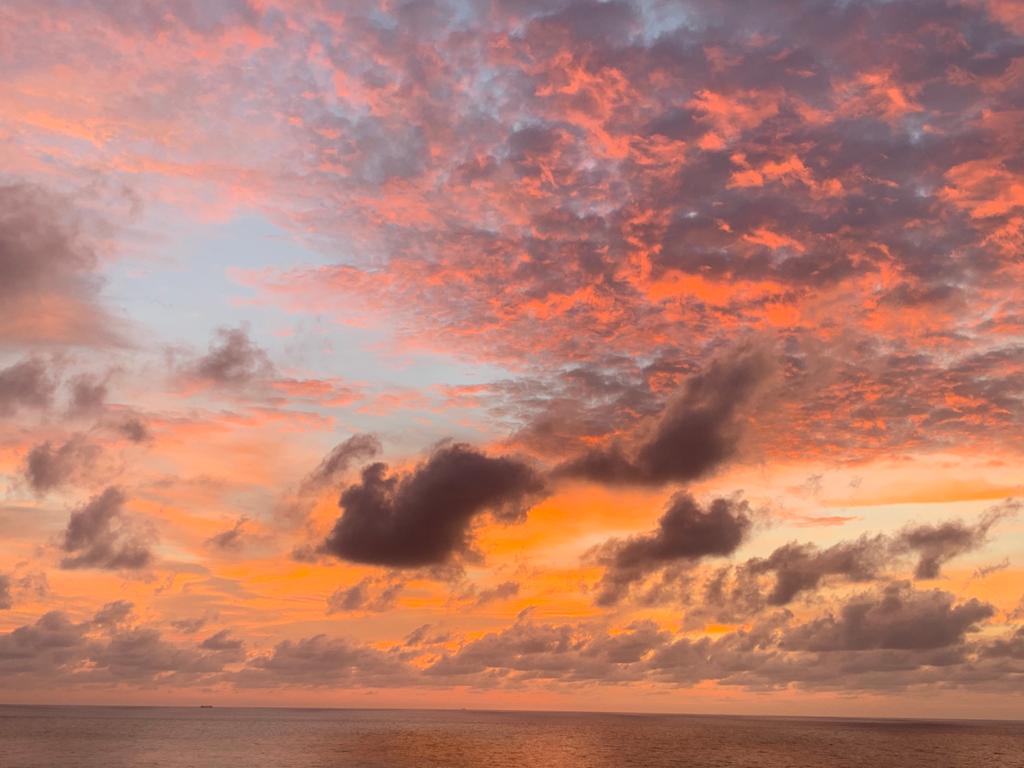 Colombia, one of the principal cultural hubs in the Latin American world, established its ITI Centre in November 2020. The Centre will promote scenic arts in Colombia and strengthen partnerships across the globe.

The Centre will work throughout Colombia with the headquarters in the magical Caribbean baroque walled city of Cartagena de Indias. Founded in 1533 it was declared as Common Heritage of Mankind by UNESCO. The city hosts numerous theatre, film, music and literary festivals in its plethora of palaces, cathedrals, chapels, convents and other architectural jewels, as you can see from the photographs on the website.

At the suggestion of Colombian Ambassador to Ghana, a visit was arranged to H.E. Dr. Erieka Bennett, Founder and head of Mission of Diaspora African Forum (DAF)in Ghana.

DAF is the first and only diplomatic mission that deals with diaspora issues. It supports the African Union in the representation of African diaspora and their strategic involvement in the ongoing development of Africa.

ITI Colombia explained its mission in Ghana to film the docufiction Ulysses from Ghana.

It was agreed that an interview for the film will be conducted the following day with Dr. Tony Y. Luck, African transformation and Development Specialist. Dr. Luck also accompanied Co-President of ITI Colombia during the meeting with Ga Mantse in Accra. 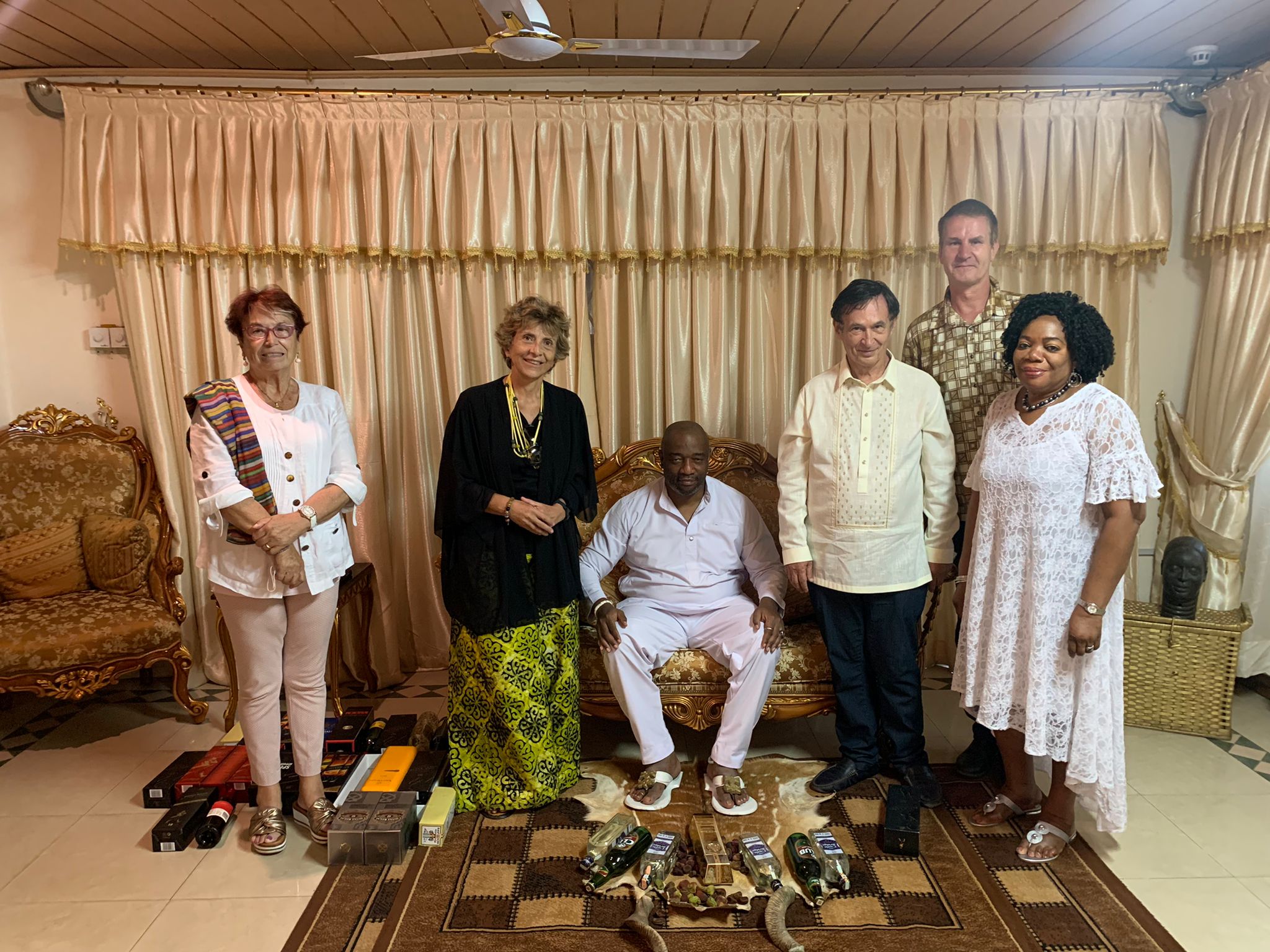 Ambassador Ashim Morton, President of Millennium Foundation, arranged an audience with the King of Ga people in Accra (Ga Manse) in his royal residence to discuss cooperation with the docufiction Ulysses from Ghana. His Majesty expressed his willingness to participate in the project. He also invited H.E. Claudia Turbay, Ambassador of Colombia to Ghana and 17 other African countries, Dr. Sebek, Co-President of ITI Colombia and Mr. Bernd Alder, Director of the film, and Founder and Director of Alder Art Studio in Barcelona, for a festivity of tribal music and dancing on Sunday 29th August, when he will be joined by elders and chiefs of his tribe. 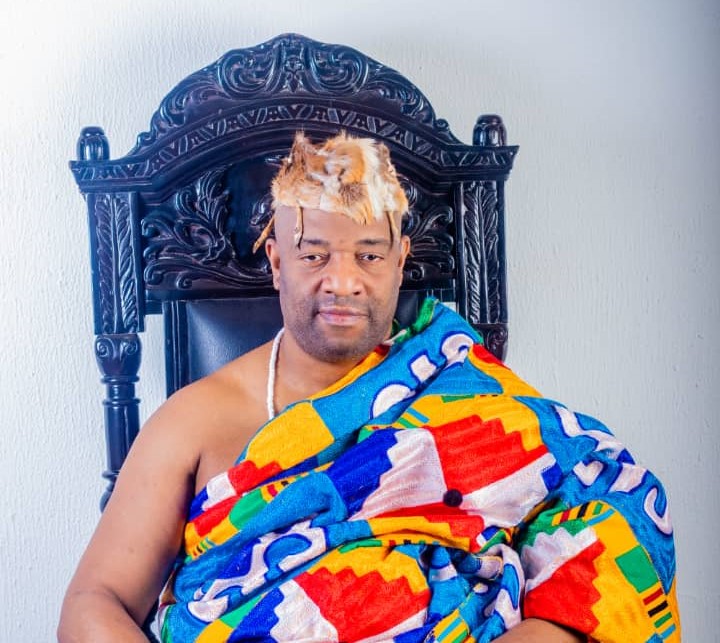 MEETING WITH HIS EMINENCE OSMAN NUHU SHARUBUTU, THE NATIONAL IMAM OF GHANA

The Co-President of ITI, accompanied the Ambassador of Colombia to Ghana and Ambassadors of Mexico to Ghana at a meeting with His Eminence Osman Nuhu Sharubutu, the National Imam of Ghana and other leading clerics.

The National Imam is now 102 years old and serves as a powerful peace builder not only in Ghana but also Africa and champion of religious tolerance. ITI Co-President passed on special greetings from Mrs. Ela Gandhi, Co - President of World Conference on Religions for Peace international and Abdulhameed Alsaleh from Saudi Arabia and paid tribute to the National Imam of Ghana for his peacebuilding efforts, all the more important as the wind of religious intolerance is blowing in much of Sahel countries, bordering Ghana. His Eminence quoted from Quran and said that whilst God made us all diverse, he asked for respect for all religious beliefs. He extolled Ghana as a shining example of religious tolerance.

CEREMONY IN THE PALACE OF GA MANTSE (KING OF GA)

Following the initial audience with His Majesty, King Tackie Teiko Tsuru II ( Ga Mantse) on 22nd August, a pageant was organized for Colombian Ambassador to Ghana, Claudia Turbay, the ITI Co-President and Director of Docufiction Ulysses from Ghana, as well as for Ambassadors of Mexico and Italy, chargé d'affaires of Switzerland, an official from the EU mission to Ghana. On this occasion, the king was accompanied by chiefs and elders in a traditional ceremony with prayers, drumming, dancing and singing. The film crew of Ulysses from Ghana also conducted an interview with the King on the role of traditional rules in Africa as a bonding agent to secure national unity, pride and dignity in the rich cultural diversity. The ITI Colombia will continue dialogue with Ga Mantse as well as with the King of Ashanti (Asantehene). 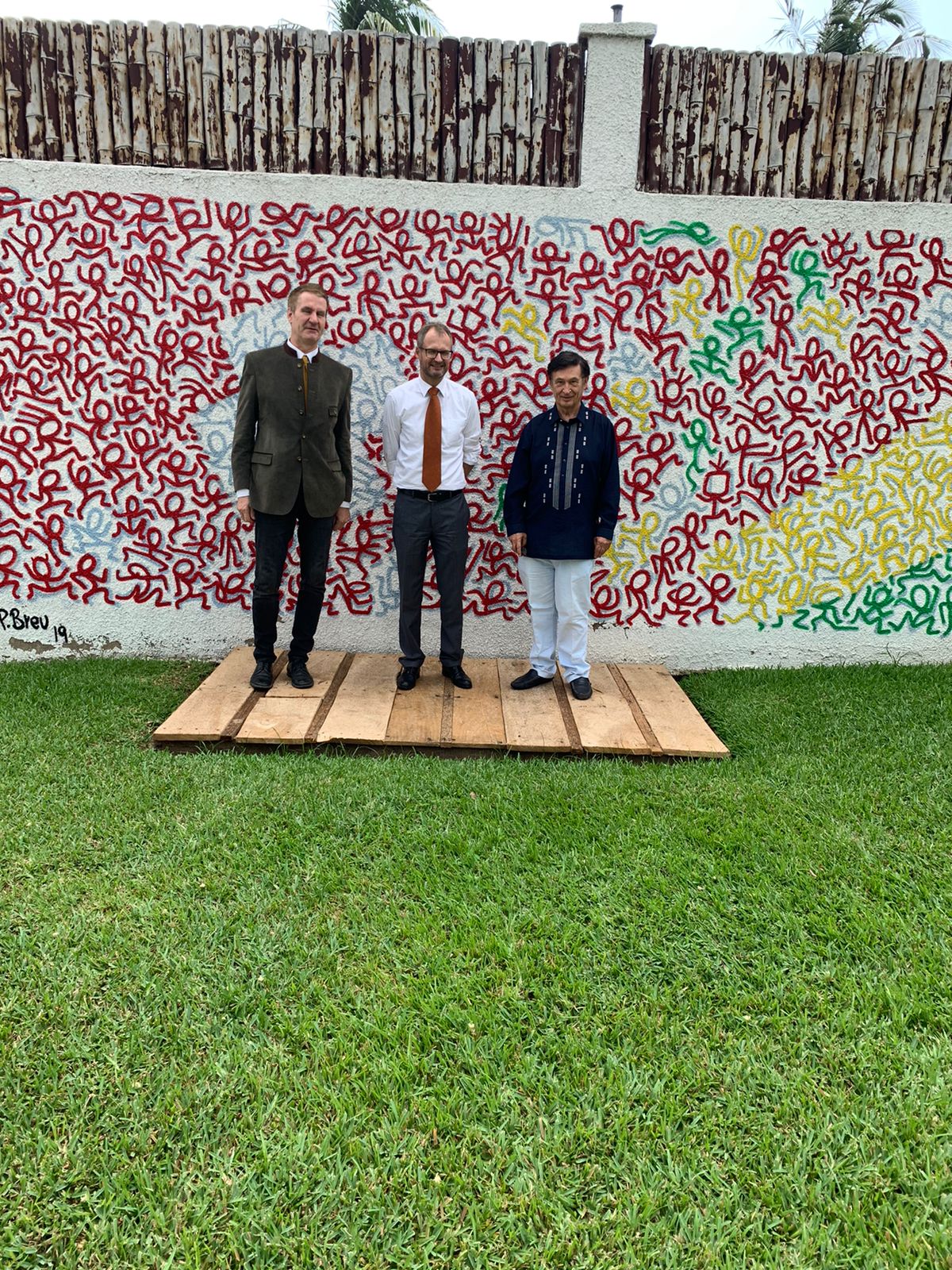 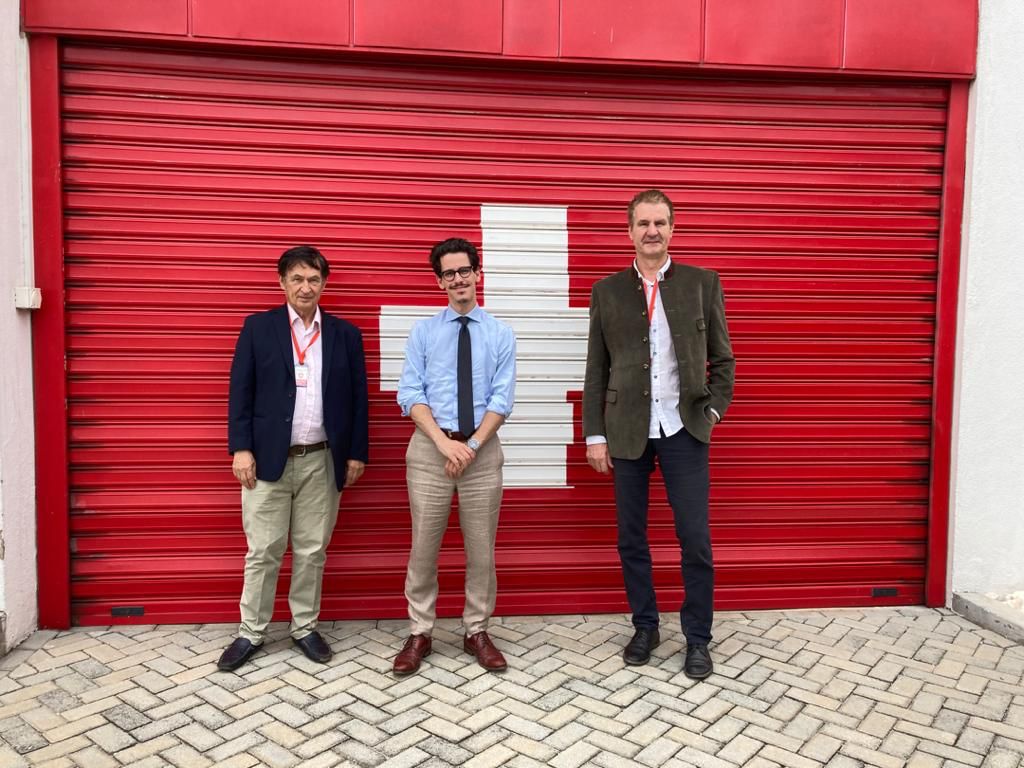 Mr. Bernd Alder, the Swiss Director of docufiction of Ulysses from Ghana, and Dr. Sebek held talks with Ambassador of Swiss Confederation to Ghana, H.E. Phillip Stalder on 20th August and with charge d’affaires of the Embassy, Mr. Tim Segessemann on 27th August to discuss cooperation with Switzerland on the docufiction currently in pre-production in Ghana. 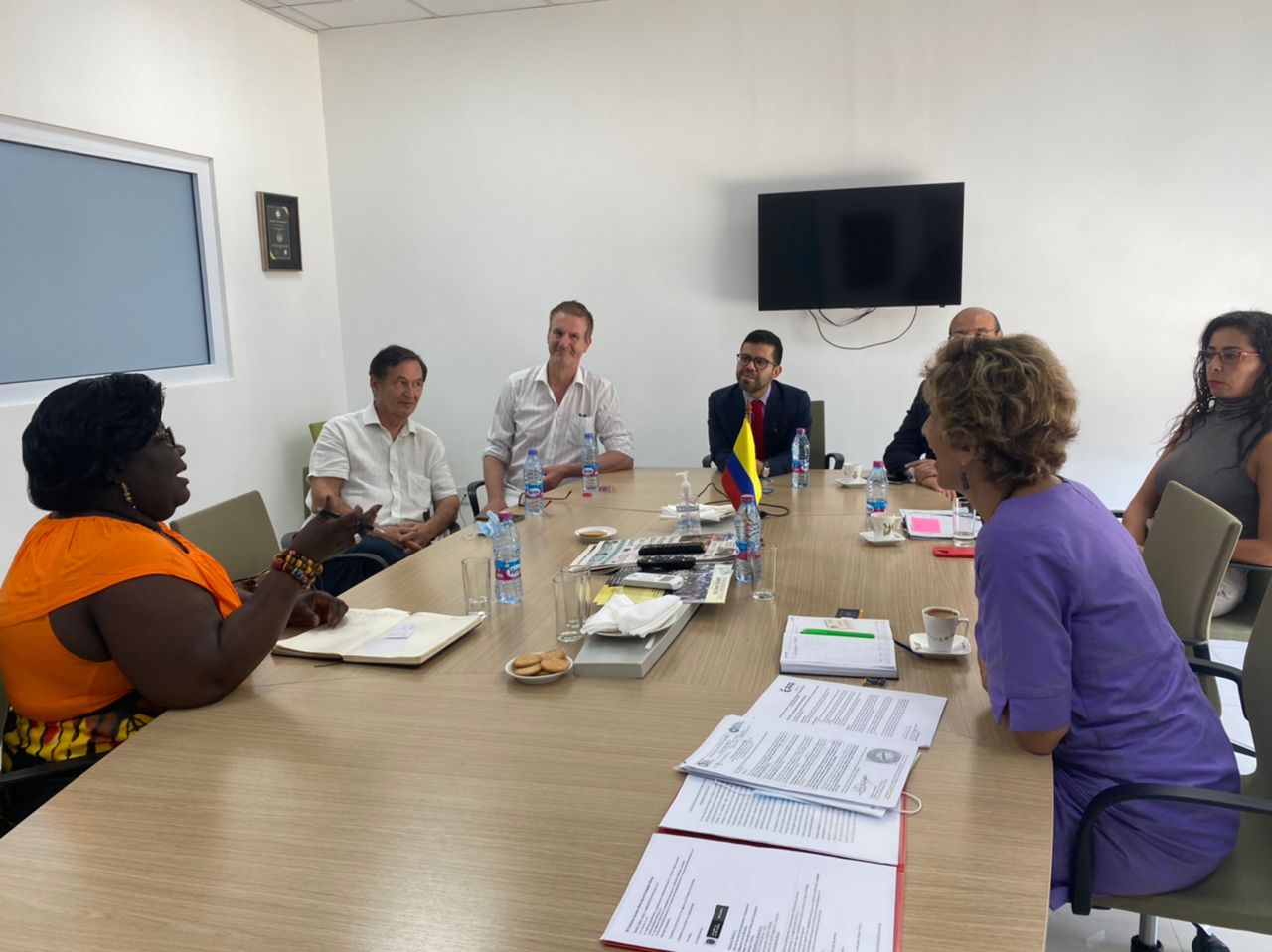 The ITI Co-President, Viktor Sebek, attended a meeting with Ms. Janet Edna Nyame, Executive Director of the National Commission of Culture of Ghana which was organized by H.E. Claudia Turbay, Ambassador foo Colombia to 18 African countries in the Colombian Embassy in Ghana, together with his H.E. Enrique Escorza, Ambassador of Mexico to Ghana, Gambia, Liberia and Sierra Leone. Cooperation between Colombia and Ghana was discussed in the light of the impending twinning arrangement between Cartagena and Accra.

Ambassador Ashim Morton, President of Millennium Foundation, arranged an audience with the King of Ga people in Accra (Ga Manse) in his royal residence to discuss cooperation with the docufiction Ulysses from Ghana. His Majesty expressed his willingness to participate in the project. He also invited H.E. Claudia Turbay, Ambassador of Colombia to Ghana and 17 other African countries, Dr. Sebek, Co-President of ITI Colombia and Mr. Bernd Alder, Director of the film, and Founder and Director of Alder Art Studio in Barcelona, for a festivity of tribal music and dancing on Sunday 29th August, when he will be joined by elders and chiefs of his tribe. 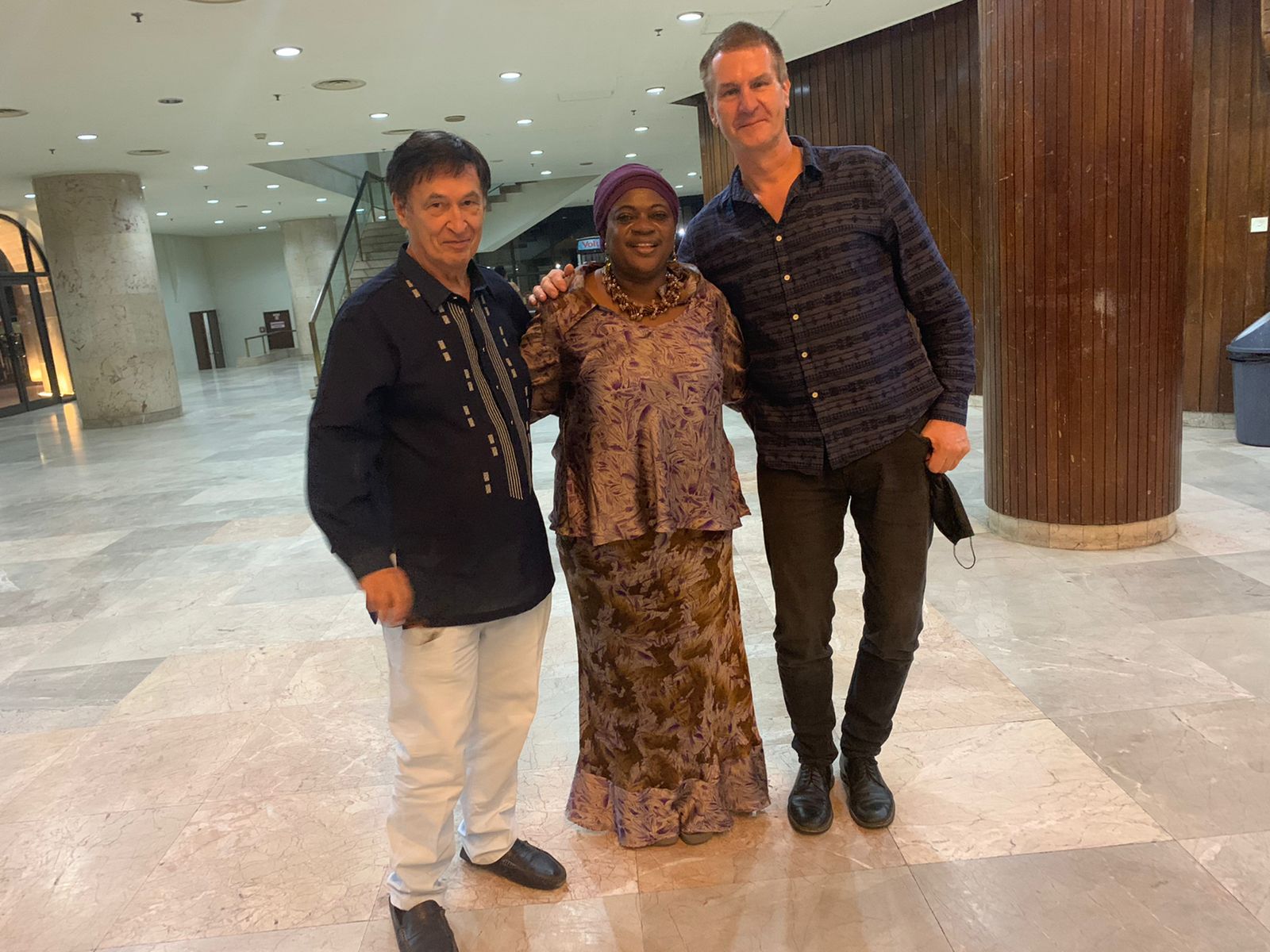 At the invitation of Dr. Akosua Abdallah, President of the Ghana Centre of the International Theatre Institute, Co-President of ITI Colombia and the Director of Ulysses from Ghana docufiction attended the premiere of the new play Ayuyii by Joyce Bekoe. The two-and-a-half-hour play is compilation of different tribal customs and also illustrates the rich palette of diverse folklore of Ghana. 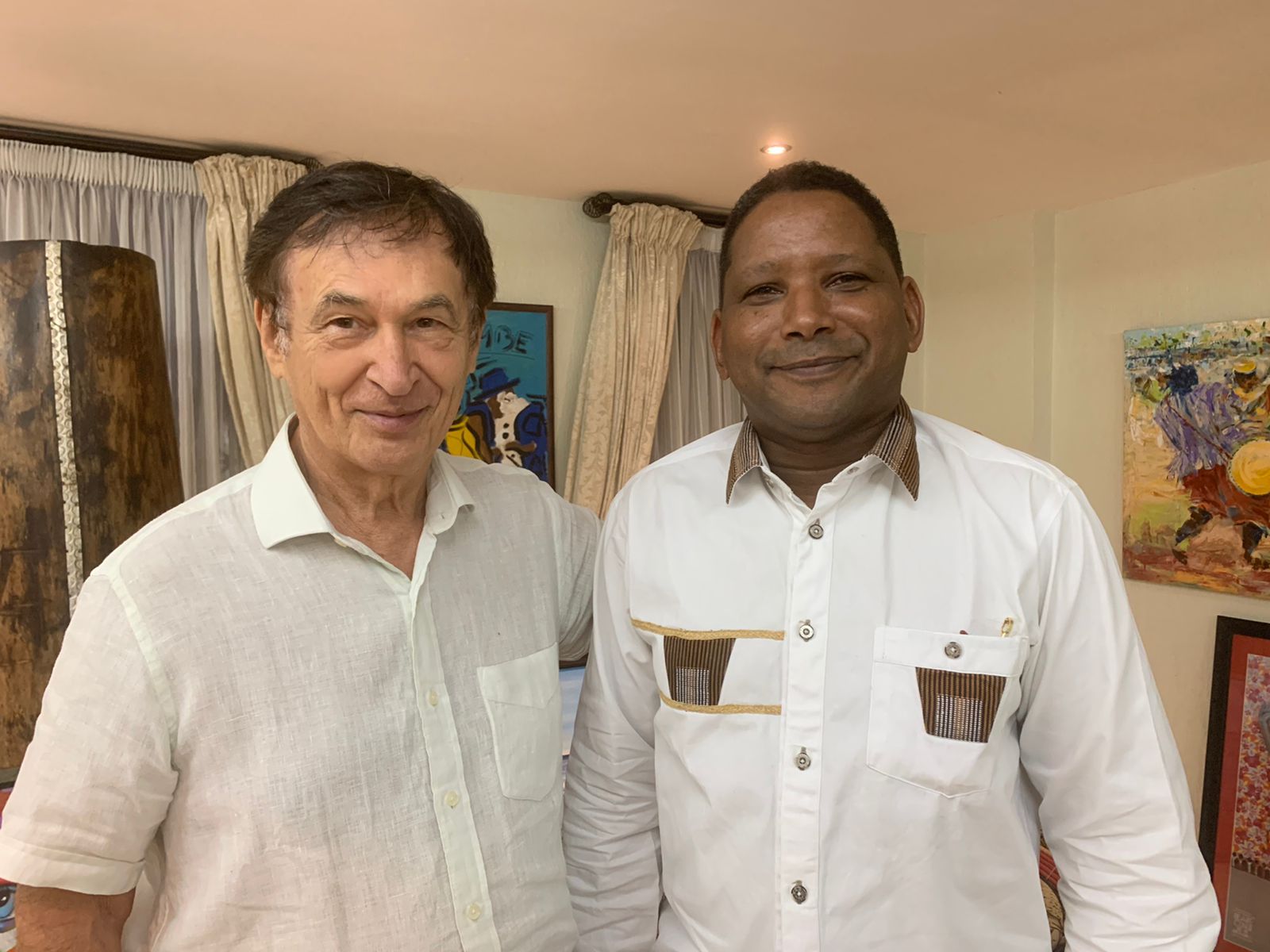 H.E. Claudia Turbay Ambassador of Colombia to Ghana and 17 other West African countries and Dr. Sebek held a meeting with Mr. Abdourahamane Diallo, Director of UNESCO country office for Ghana to discuss cultural heritage of UNESCO in both Ghana and Colombia in view of the forthcoming twinning arrangement between Mayors of Accra and Cartagena. 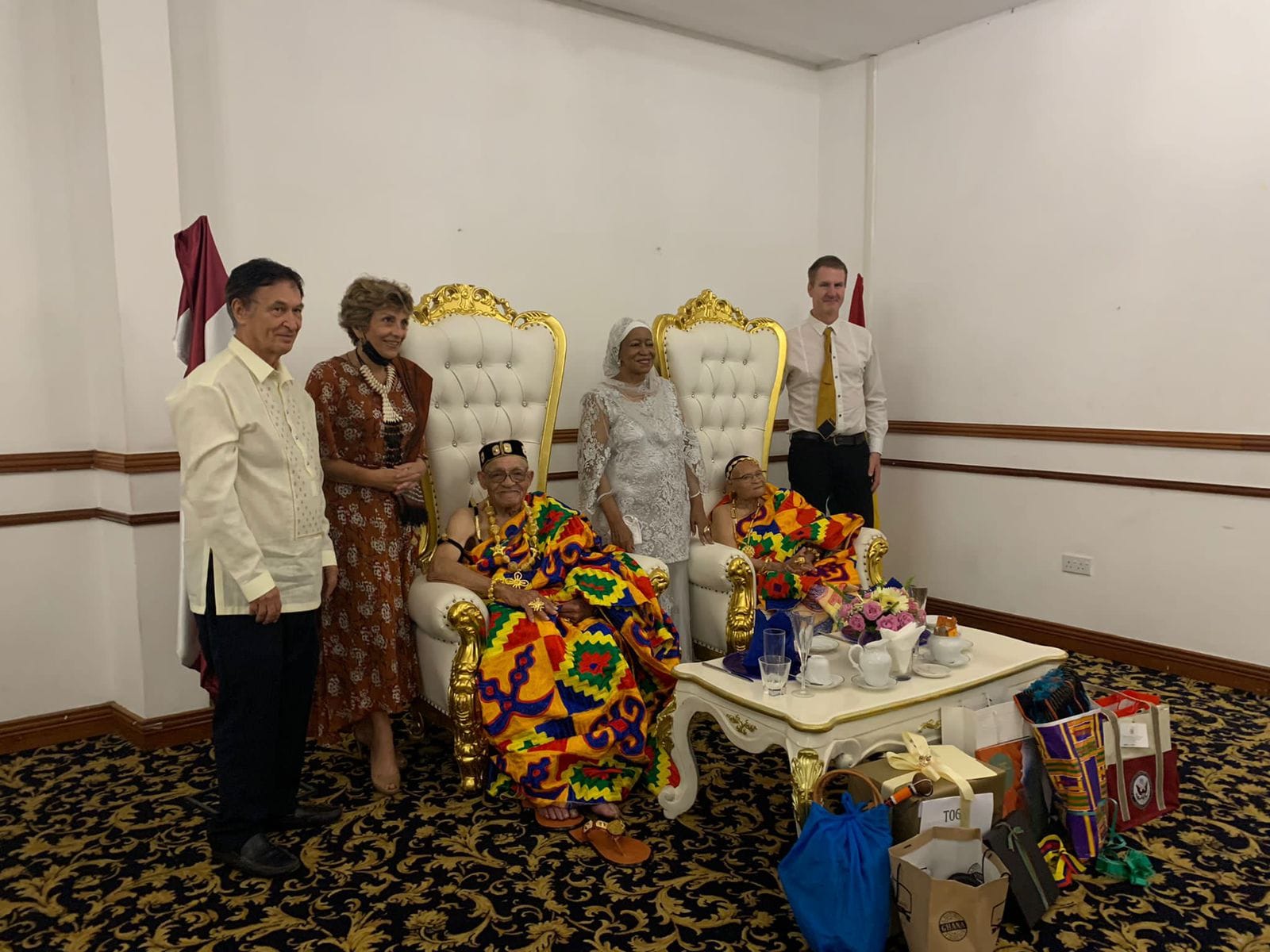 Co-President of Colombian ITI, Dr. Sebek, was invited to attend the ceremony marking 100 years of the Race Massacre when mobs of white residents attacked black residents and destroyed homes and businesses of the Greenwood black district in Tulsa, Oklahoma. Two of the three survivors, Mother Viola Ford Fletcher, 107 years old, and Uncle Redd, 100 years old, were in attendance, together with diplomatic corps from Africa, United States and Colombia. It marked their return to “Mother Africa”, fulfilling a dream they had as children, and which was `materialized now when they were over 100 years old./p>

The inspiration or the docufiction “Ulysses from Ghana” is the play Slaves by the premier Ghanaian playwright Mohamed Abdallah. The play was premiered at the National Theatre in 1988. Mr. Bernd Alder Founder and Director Alder Art Studio, director the docufiction, conducted interviews through Dr. Akosua Abdallah, with the original cast on the slavery and racial discrimination then and now.

MEETING WITH GHANIAN MINISTER OF TOURISM, ART AND CULTURE 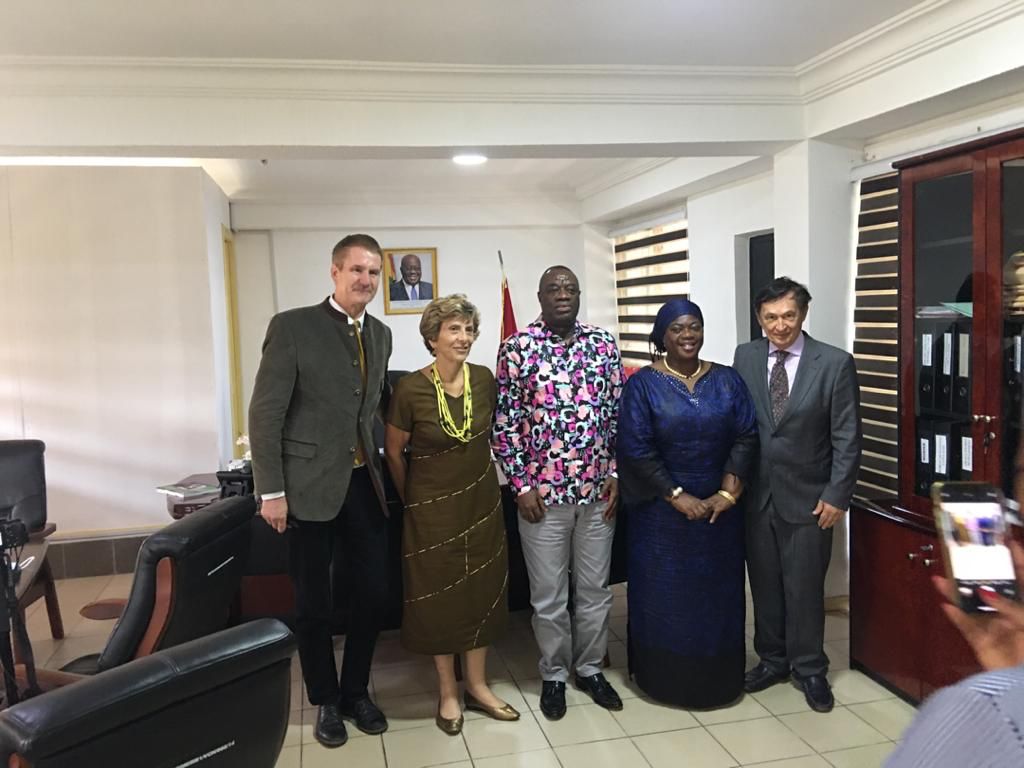 Co-President of ITI Colombia, Viktor Sebek, held at a meeting with Mr. Ibragim Mohammed Awal, Minister of Tourism, Art and Culture of Ghana, accompanied by H.E. Claudia Turbay, Ambassador of Colombia to Ghana a and Dr Akosua Abdallah, President of the Ghanaian Centre of the international Theatre Institute (ITI). Dr. Sebek explained the docufiction “Ulysses from Ghana” which was being pre-produced in Ghana, to showcase the progress of Ghana as a country to build a premier country not only for its own population but also as a magnet for diaspora of people of African origin across the world, especially from the United States.

Also discussed was the cultural component of the future twinning between cities of Accra and Cartagena and links with UNESCO. It was agreed to hold a zoom involving the Minister. Ambassador Turbay, Viktor Sebek and Hedva Ser, UNESCO Goodwill Ambassador for Cultural Diplomacy and to continue discussions in the first week of September.

In conjunction with Colombian Centre of the International Theatre Institute, SSCC has been SSCC has been showcasing world music from different countries of the world.

The latest contribution has been received from Uzbekistan through its mission to UNESCO, to good offices of Mrs. Hedva Ser, UNESCO Goodwill Ambassador for Cultural Diplomacy.

This week the video of Afro Legends, young artists living in Aguablanca, is launched with a song that talks about displacement. The video is realized by a young group called La Ruta also from Cali.

Young Henry Pimiento is a Wayú from the Pushaina clan, he studied classical guitar and creates contemporary music based on his tradition. 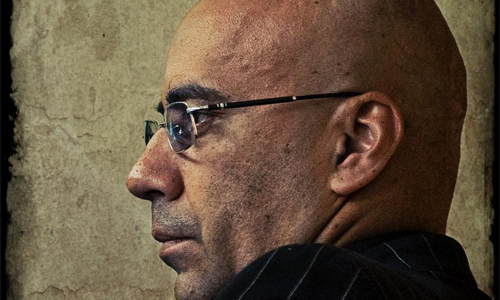 On April 9, the production that Iván Benavides made for the Bullenrap group from La Libertad Sucre was launched, whose leader, the young Miguel Caraballo had to flee due to threats to his life more than a month ago﻿ 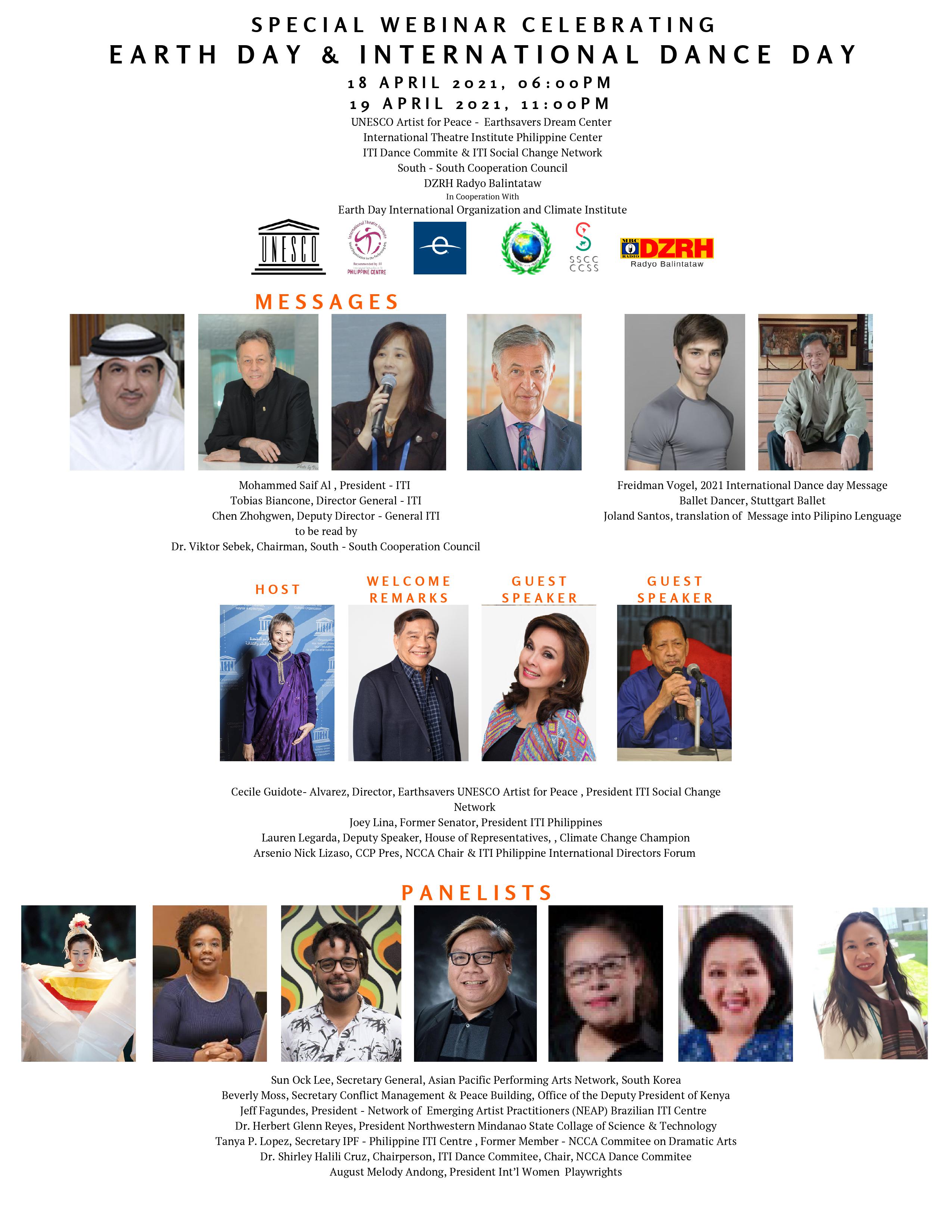 SSCC is pleased to have had an opportunity of marking the Interational Earth Day and International Dance Day through a special webinar hosted from the Philippines by its Policy Advisory Board member, Cecile Guidote Alvarez, with participation of SSCC Chairman, Viktor Sebek, as well as Beverly Moss from Kenya and Jef Fagundes, SSCC Youth Ambassador from Brazil.

The International Theatre Institute ITI is pleased to announce to you that the Message Author for the World Theatre Day 2021 is the distinguished theatre, film and television actress Helen MIRREN from UK. 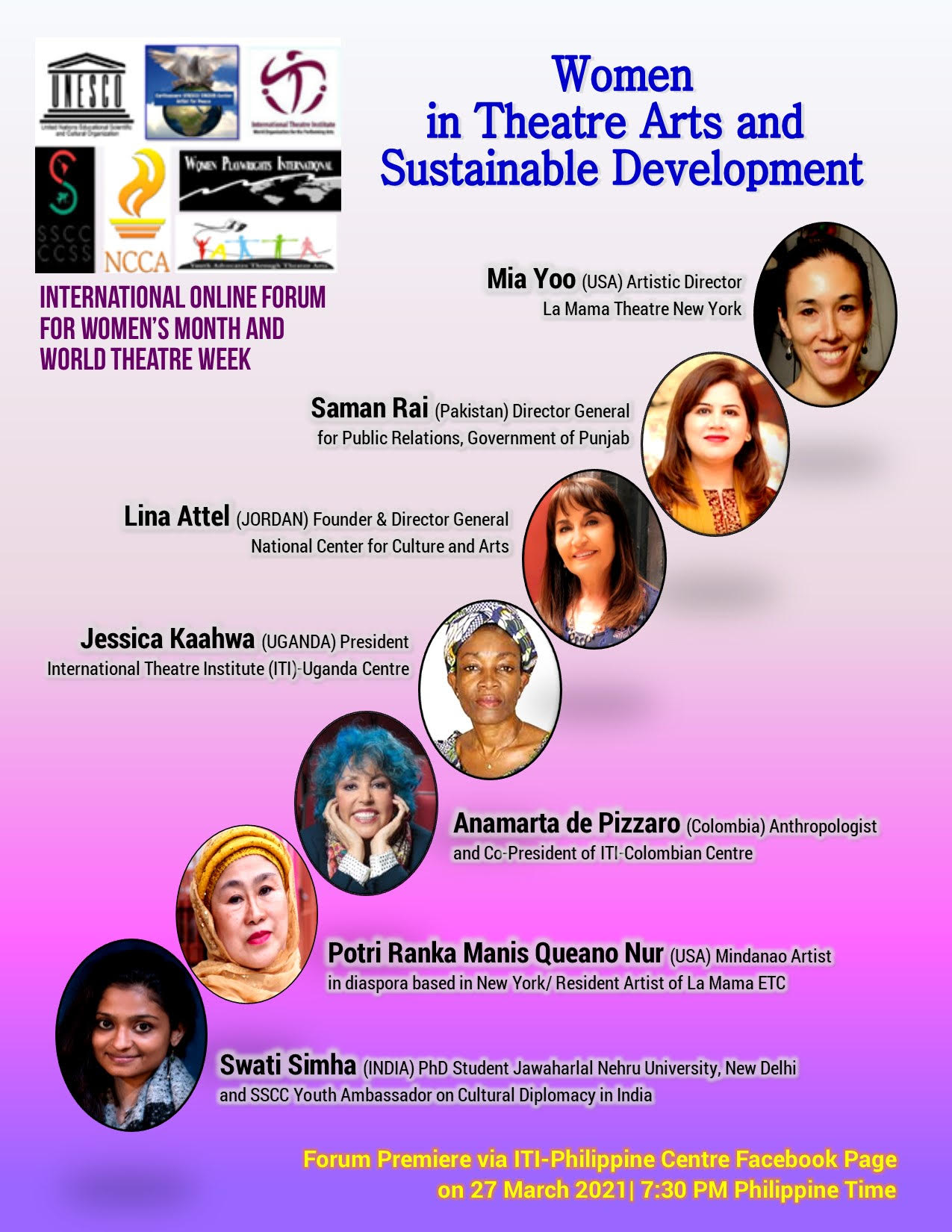 Zoom Link for the International Forum for Women and World Theatre Month. 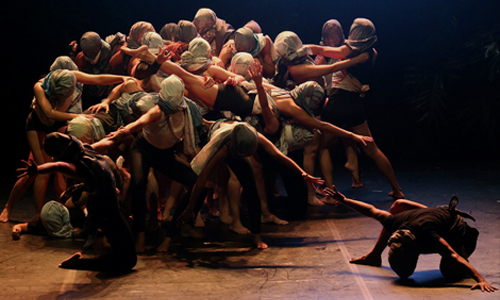 Ivan Benavides, composer and member of ITI Colombia Board, is in charge of videos on music influenced by African melodic idiom and rhythms from the Caribbean and the Pacific. 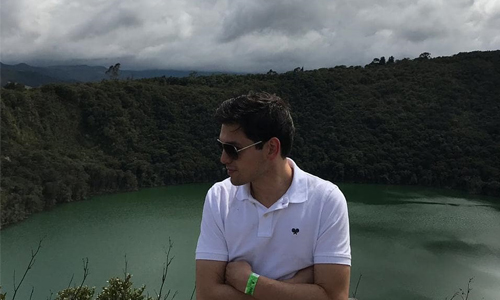 Jahir Rivera, harpist and member of ITI Colombia Board, has produced the video on the music from savanna (la musica llanera) with his group Caporal. More 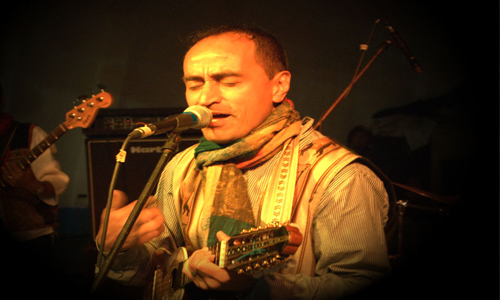 Carlos Enriquez, composer and vocalist of the ensemble La Tierra Mestiza from Pasto. He produced a new video on Andean Music. 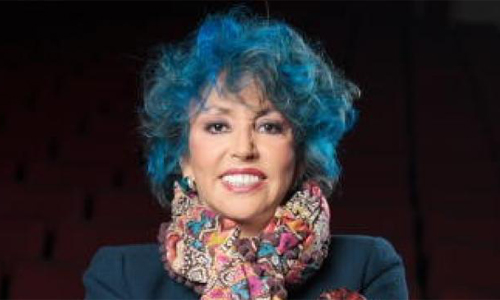 Co-President of ITI Colombia, Ana Marta de Pizarro ,was invited by the General Secretariat of ITI to be one of 12 speakers at the DaLiangShan International Theatre Festival in China ion 16th November 2020. With China's largest community of ethnic Yi people, the region has a long history and well-preserved folk culture. About 800 people were in the audience. 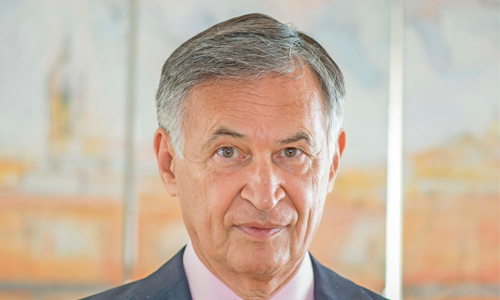 The National Association of African American Studies in the United States has invited ITI Colombian Centre Co-President, Dr. Sebek, to deliver a keynote speech at their National Conference on 16th February 2021 to deal with cultural diplomacy and Resiliart in conflict zone, with special emphasis on Africa. 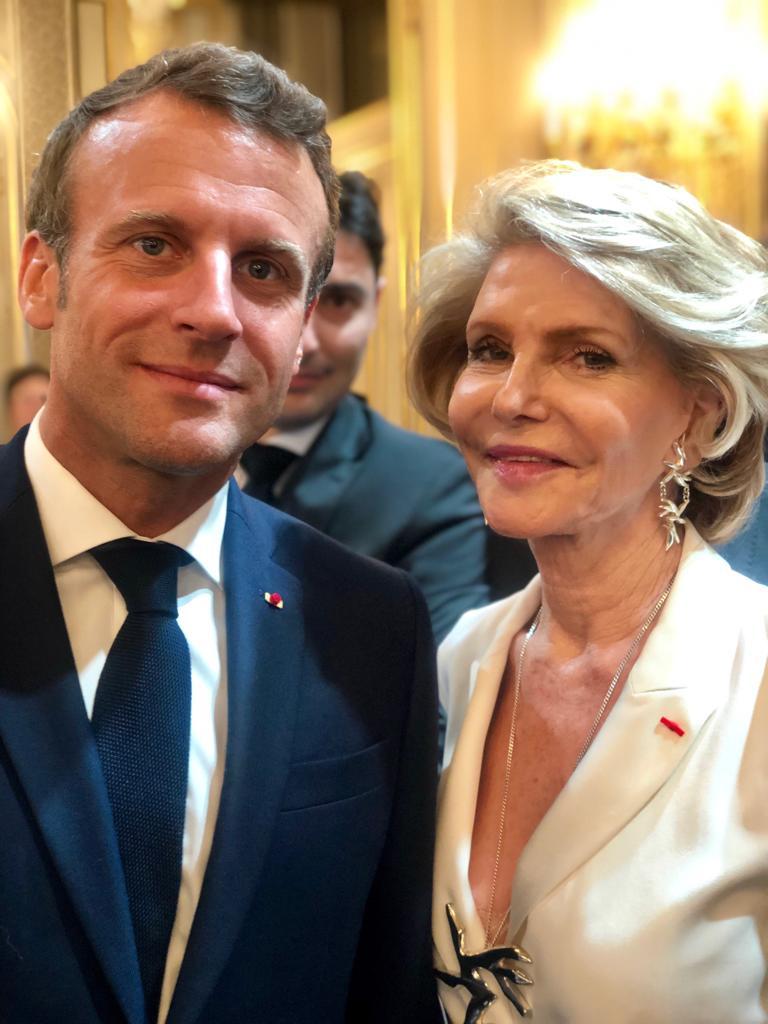 Colombian Centre ITI under SSCC is in the process of establishing a programme of cultural diplomacy with Hedva Ser, SSCC Policy Advisory Board member and UNESCO Goodwill Ambassador for Cultural Diplomacy.